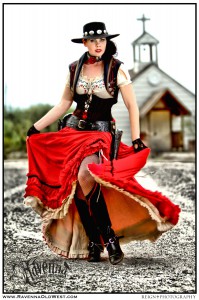 strutting down the catwalks of New York or Paris, but you will find them on the silver screen and along the boardwalk.

The 37-year-old, self-taught seamstress has earned a reputation for producing gorgeous and striking outfits inspired by the Wild West. A Cochise County native, Jenna’s work can be found in film, television and on stage, depicting old west styles, and old west with a modern twist.

“I designed a couple of wedding dresses and then I started looking at the 1880’s costumes you see in Tombstone, and realized they were similar to what I had designed,” said Jenna, also an actress and model, who found she had a natural affinity with the Wild West. 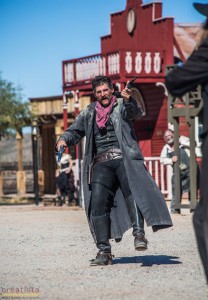 “I was born and raised in Arizona so I grew up in the old west,” said Jenna, whose design business is called Ravenna  Old & New West Ventures. “Just the whole history of that period influences me a lot.” The result of that influence is intricately made Victorian gowns, seductive saloon girl outfits, and cowgirl garb with attitude.

Most recently, Tombstone-based Jenna designed costumes for country music star Randy Houser’s music videos “Like A Cowboy” and “We Went”. Her work has also appeared in a number of television documentaries, including on the National Geographic and Travel channels.

She is currently working on a new period movie called “Common Threads”, being produced by Team Two Entertainment and fi lmed at Old Tucson Studios. The director is William Shockley, better known as Hank in “Dr. Quinn Medicine Woman”, and who made a surprise appearance at last year’s Sizzle fundraiser in Sierra Vista. 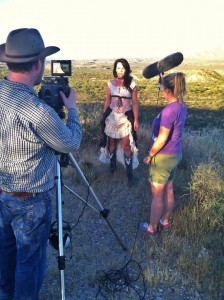 When designing for movies and period pieces, Jenna ensures her costumes are historically accurate, but adds her own touches to outfits she makes for sale. Her stunning Victorian dresses can be custom ordered for $1,000 to $1,500.

“I never make the same exact dress twice,” she said. “I consider them my art. Each is serial marked, signed by me, and then sold as a unique piece of art. I have a vast store of designs in my head and have a goal to make each of them a reality.” 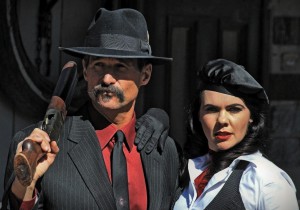 Currently, Jenna meets with clients by appointment only, but is planning to set up an online retail store soon.  Vitality invited Jenna and her friends Beth Messenger and Julia Hastings to model some of her costumes at Gammon’s Gulch Movie Set & Museum, an authentic old Western town, open to the public by appointment, north of Benson. The results were sensational