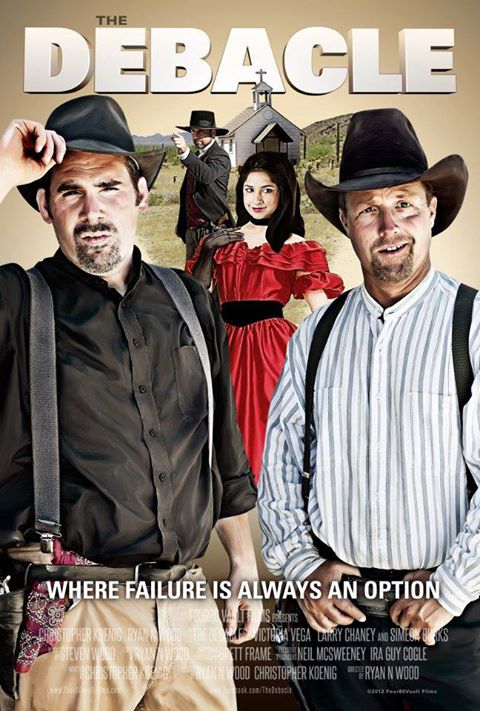 THE DEBACLE: Long time friends Vaughn (a devout hypochondriac) and Larry (a hapless and perpetually single romantic) have never met a challenge they haven’t run from. When a chance encounter with a stranger leads to their finding themselves transported to an old west town in the 1870’s, they’re forced into situations where failure appears to be a foregone conclusion. Terrified by change and even the hint of danger, Vaughn and Larry are a given a task that must be completed within two weeks or risk never returning to their modern day reality. Given their built-in limitations, a hilarious series of events ensue as they work to overcome their fears, competing interests and they must do battle with an ill-tempered gunslinger in an effort to return home.

The family, comedy The Debacle is now available for pre-order on DVD or Blu-Ray.

The Debacle on DVD

The Debacle on Blu-ray

This laugh-out-loud western also includes extras like a bloopers reel and extra scenes.

Just heard from the Producers of Debacle…, we’re getting close to seeing the finished project. Will keep you informed as more news comes in.

“The Debacle” was filmed in part at Gammons Gulch in July, 2011. It was produced and directed by Chris Koenig and Ryan Woods of Four 80 Vault Films